A new containerized CDC TB lab—meeting the biosafety level 3 criteria—has been located in Extension 12 in Gaborone, next to the National TB Reference Laboratory. The lab will support CDC TB research as well as benefit MOH’s national lab practice .

In early July, a new containerized laboratory was transported from South Africa to Gaborone on a flatbed truck. Though it may have looked like a small and simple Porto cabin of sorts, this self-contained laboratory is actually incredibly hi-tech.

This lab has a Biosafety Level 3 (BSL-3) rating which means that it delivers the highest level of control over airborne germs. The laboratory is constructed to create negative air pressure inside the unit so that germs (pathogens) are constantly and effectively removed from the air. The negative pressure essentially “sucks” the air out of the laboratory and then through complex filters that trap any harmful germs. This ensures a safe working environment for the laboratory technicians. These controls also ensure that the samples being tested are not compromised in any way.

The first of this kind of containerized laboratory was created in response to two big research studies in Zambia. Because this containerized laboratory proved useful in the Zambian con-text, it was then introduced to a wider audience of TB researchers during the last two TB inter-national conferences. Dr. Shepherd, Director of CDC Botswana’s TB program, took notice of this product and how it could benefit TB research in Botswana. In only three months’ time, procurement, delivery, and installation was achieved. At the walk-through of the lab held on July 10th for partners, Dr. Toomey said, “Congratulations to all who made this happen. This is amazing how quickly this lab was made ready for business!”

This product is exceptional not only for its quality, but also because it is cost-effective. Dr. Shepherd called this laboratory, “A high quality and long-term solution—not a temporary solution—that we’ll use to meet the needs we have in Botswana for TB diagnosis.”

Because the laboratory is created within a self-contained structure, there are no worries about

leaks, cracks, or other issues that would hinder safety or quality. This BSL-3 lab contains two bio-safety cabinets. Bio-safety cabinets are areas in the laboratory where the technicians actually conduct the tests on the samples. These two cabinets increase the capacity in Botswana to conduct TB cultures by 67%! Before this lab arrived, the only place in the country with bio-safety cabinets was the National TB Reference Laboratory (NTRL), also in Extension 12. The NTRL contains three bio-safety cabinets that serve the national need.

This new lab cost roughly $200,000, which includes the unit, its delivery, and its installations. This is the latest, newest version of the BSL-3 lab, built with knowledge of the environment in Botswana (the significant dust and dryness). The lab will be serviced and maintained by South African technicians rather than US-based techni-cians, another cost- and time-saving factor.

The cost of the lab is inexpensive compared to renovating an existing lab. For instance, had the TB program decided to renovate and retrofit even a single room of the existing Porto-cabins at Extension 12, installing only a single bio-safety cabinet, the cost would have exceeded this containerized lab that holds two bio-safety cabinets. In addition to that, retrofitting an existing building can be wrought with difficulties that make it harder to ensure the highest level of control over airborne germs.

The CDC Botswana TB program expects that the South African National Accreditation System (SANAS) will accredit this lab in the very near future.

This laboratory was procured to support the XRESS and Kopanyo studies. The NTRL, with only three bio-safety cabinets, must support all of the national TB culture samples. Conducting research tests at NTRL would have put an even greater burden on an already overburdened facility. By procuring this BSL-3 containerized lab, not only will it facilitate the CDC Botswana TB research but it also will backstop the national lab.

Joyce Basotli, the TB Program’s Lab Supervisor, has provided the necessary over-sight during this process of lab acquisition and the make-ready. She estimates that the lab will culture and test more than 650 sputum samples each month. Diagnosing TB involves a two-step process. First a stained sputum sample is put under a microscope in order to visually check for TB. This test is not very sensitive and only picks up about half of all TB cases. At the second stage—and this is where the new lab comes in—the sample (first identified as “negative for TB”) is put into a fluid to incubate any germs that are present so that they will grow and reveal any TB germs not found in stage one. In that second stage, another test is conducted to determine if the TB germs are resistant to particular drugs so that patients are en-rolled in the correct treatment. The XPRESS and Kopanyo study, though re-search, will increase the number of people tested for and then treated for TB.

Joyce Basotli, further explained the importance of this lab saying, “TB is a significant problem due to the high HIV rates in Botswana. By increasing our capacity to conduct cultures in this lab, the turnaround time for results will be reduced and more patients will be brought into the system to receive treatment. And that, in turn, helps combat the illness.”

CAPE TOWN – A South African company’s idea to convert shipping containers into high-tech AIDS laboratories should be copied across Africa, an executive for its US medical equipment supplier said on Tuesday.

A lack of quality laboratory services in the world’s poorest continent hampers the battle against HIV-AIDS, with the sub-Saharan Africa region hardest hit by the global pandemic which kills millions each year.
‘I think its a very exciting concept and I think it is one that can be replicated across Africa,’ Krista Thompson, general manager for global health at Becton Dickinson & Co , told Reuters on a site visit to Gugulethu township near Cape Town.
Gugulethu is the site of the first containerised AIDS laboratory from Toga Labs, a private South African molecular diagnostics laboratory. BD supplies equipment to the lab.
With its multitude of tin shacks, poor water supplies and limited electricity access, Gugulethu is typical of poor settlements across Africa.
Established in 2004, the Gugulethu lab provides testing for about 4 500 people on antiretroviral drugs, and is one of 10 operating in South Africa.
Africa’s strongest economy has one of the world’s highest AIDS burdens with an estimated 1 in 5 infected out of a population of 47 million.
‘Its very important for the use of drugs to have good diagnostics and laboratory services to go along with that. First we need to know who to treat and then we need to know whether the treatment was working or not,’ Thompson said.
Des Martin, a director at Toga, told Reuters: ‘You can’t have antiretroviral programmes without laboratory support, its dangerous. So this provides the means for people who live very far away to have standards of care on their doorstep.’
He said diagnostics could be extended to include tests for tuberculosis, diabetes and other diseases.
The United States President’s Emergency Plan for Aids Relief was supporting another five planned container labs in South Africa, two in Malawi, two in Zambia and one in Liberia, Martin said. Each fully equipped lab costs in the region of $250000.
The Gugulethu lab, run by a medical technologist and an administrator, processes an estimated 11 000 blood samples a year, Martin said.
‘We believe this is a model for the developing world in resource constrained settings,’ he said. – Nampa-Reuters”

“The ZAMSTAR TB Prevalence Survey, which ran from October 2009 – January 2011, sought to determine prevalences of TB and HIV

in 80,000 people at 16 sites in Zambia and 40,000 people at 8 sites in South Africa. In Zambia, great distances and poor roads make it difficult to transport sputum specimens for TB culture to central laboratories. Therefore, we developed a decentralized approach of placing containerized BSL3 laboratories close to study sites.

Laboratories, constructed within 40-foot shipping containers, are delivered by truck to existing health facilities, placed onto plinths and connected to local utilities. Equipped with air-conditioning and generator, each is divided into three sections: specimen receiving, vestibule, specimen processing and culture (BSL3). Bar-coded sputum specimens enter the receiving area through the main entry/exit, are scanned into the database, then pass through the double-door vestibule into the processing and culture room (BSL3). The processing and culture room (BSL3), maintained at negative pressure, can accommodate 100 sputum specimens per day and contains two Class II, Type A2 biological safety cabinets (BSC), centrifuge, incubator, refrigerator and freezer. Specimens are decontaminated in BSC 1 (recirculating). Following centrifugation, manual MGIT cultures are inoculated in BSC 2 (externally-vented), then incubated at 37C. Cultures are scanned for growth once per week for up to 6 weeks. Cultures exhibiting growth are tested in BSC 2 using the Capilia TB assay to confirm the presence of MTB complex. Aliquots of decontaminated sputum and positive cultures are stored at -20C until transported to the central laboratory. All biohazard waste is autoclaved, then incinerated on site.

Containerized laboratories may be a useful tool for performing large-scale TB prevalence surveys in areas with underdeveloped transportation networks. In addition, this design may serve as a model for expanding and decentralizing TB diagnostic capacity in many parts of the world.

About ZamLab CTL
In Zambia, great distances and poor roads often make it difficult to transport sputum specimens for TB culture to central laboratories. To combat this problem, ZAMBART has worked with stakeholders, including the Zambian Ministry of Health, to develop a decentralized approach placing four containerized BSL3 laboratories, each capable of processing 100 sputum specimens per day, close to the study sites. The containerized laboratories, the first of their kind in the world, are located at Zambian Ministry of Health facilities in Lusaka, Kabwe, Ndola and Livingstone.

After the official opening of the ZamLab CTL on October 7, 2009, work was undertaken to train biomedical scientists and technologists on how to use the equipment before the prevalence survey began and the sputum specimens begin arriving in earnest. At the completion of the ZAMSTAR study, the labs are tentatively planned to be handed over to the Zambian Ministry of Health for further TB research in the country.

ZamLab CTL goes global
ZAMBART’s containerized BSL-3 laboratories are attracting attention from around the world. Groups working in Kenya, Ghana, Haiti and Zambia are placing orders for their own CTLs. In addition, two CTLs will be used to construct a new BSL-3 facility at the UTH TB laboratory in Lusaka. At the 2010 International Union Against Tuberculosis and Lung Disease (IUATLD) Conference in Berlin in November, ZAMBART staff presented an update on the use of the containerized labs in the ZAMSTAR TB Prevalence Survey. Also in Berlin, BD, manufacturers of MGIT equipment and reagents, will host a symposium on containerized laboratories featuring the ZamLab CTL.

“In Berlin in November 2010, we had a mock full-scale CTL in the conference hall for people to tour, which was very well received and gathered a lot of interest in the ZamLab CTL,” said Barry Kosloff, ZamLab CTL Project Manager. “ZAMBART staff should be proud of the pioneering work they are doing in these unique laboratories and tell people that they were the first to work in a ZamLab CTL.”

(Portions of the above text were part of an abstract submitted at the 40th Union World Conference on Lung Health, Abstract 94821, December 2009, BR Kosloff, P de Haas, H Ayles) 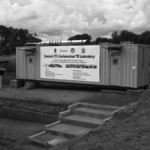 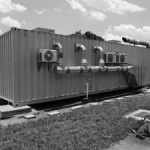 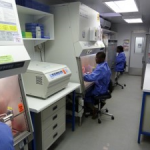 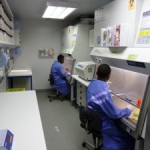